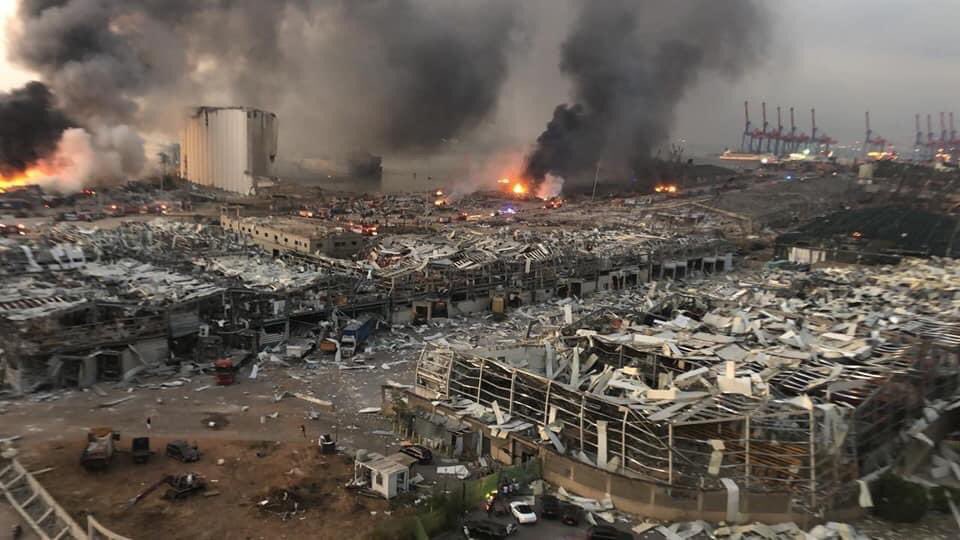 The explosion in Beirut is now confirmed to have been an atomic explosion. We know this to be the case because according to USGS  radiation readings levels spiked by a factor of ten at the time of the blast. Here are the charts. Use ctrl + to enlarge.

The location of the blast was not a fireworks factory  as Prime Minister Netanyahu stood in front of the UN a couple of years ago after the Israeli raid on Iran’s nuclear documents storage facility and told the world that the location was a Hezbollah missile storage site. Video below. It is not very likely that the secondary explosion was caused by 2500 thousand tons of ammonium. Amonium nitrate does not readily burn but it will do so if contaminated with combustible material. It will accelerate the burning of combustible material and it is used as an ingredient in the manufacture of explosives. But one has to ask how would you accomplish mixing a pile of 2500 tons with an accelerant and why would would anyone in Lebanon want to do so.

Here is the filtered video image of the major secondary explosion that was called fake by the mainstream media and promptly censored. Why the rush to censor a fake video. There certainly appears to be a missile moving at a high rate of speed that disappears into the smoke of the existing fire just before the major secondary explosion takes place. Put the video on slow speed and look between the  7 and 8 second section.

Update… YouTube removed the video which means it is a threat to the official narrative. They say the video is fake but do not want anyone to see it and make up their own minds… So here it is on Vimeo. If and when they take that down it will be put it up on Brighteon. (I just clicked on the YT video and it is still up after they notified me it was being removed for breach of Community guidlines… must be due to Divine Providence!)

Hal Turner of the Hal Turner Radio Show has a background in FBI counter intelligence and here is the info that he supplied from one of his sources not long after the attack took place.

I can’t reveal my source

Here’s what I have just been told:

The explosion in Beirut was, in fact, an Israeli attack.  The Israeli strike on Beirut was an attack on Iranian armed vessels. Mossad authenticated the Intel.

Intel suggests a strike on Damascus is next.

(See the prophecy further down the page. Jesus says this is not over.)

The following prophecy is extremely timely and appears to confirm that Damascus may indeed be next. It was received on Aug 4th, 2020

In addition to the second boom that Jesus says is coming He also tells Cassandra that there will be a lot more ‘booms’ in October! Considering all of the ‘nuclear attack on America’ prophecies on this website, the additional ‘booms’ prophesied for October will probably be in the USA!

Israel definitely has a right to defend itself and it’s ability to do so has been greatly diminished in recent years. Iran has been threatening to wipe Israel off the map and with it’s massive amount of missiles and new allies including China and Russia it certainly looks to be doable. This is a very high stakes game and I am reminded of a quote by Putin. “If you know that there is going to be a fight, you have to be prepared to throw the first punch.

There seems to be a lot of people who do not want to believe that Israel would do such a thing as this attack in Beirut, but lets us not forget the Israeli assault on the unarmed USS Liberty (link) and also the events of 911 and the dancing Israeli’s. (Link)

The other ‘boom’ referred to in Cassandra’s prophecy may also be New York and not Damascus. Three recent posts at 444 prophecynews.com indicate this could be the case.

Pay Attention! My Word Is Being Fulfilled

Hello My son, this is Jehovah Elohim speaking with you this day. My children listen closely for the hour of testing has come. I test My children so that they will be tempered against the enemy who is attacking ferociously now. Testing reveals your faith, or lack thereof, and reveals to you the sin in your lives that need to be cleansed if you are to be effective in your roles in the coming days. You will see many things now that will cause great fear if you are in the world and apart from Me. This is why I have been calling each of you personally into a deeper relationship with Me. War is come to the earth, for the spiritual battle that has been raging now manifests before your physical eyes and great will be the fear of those not found in Me. Prepare yourselves, My children, to be called into service as the great harvest of souls has come. War is escalating in Lebanon, and Syria will also soon be involved. When you see this drop to your knees in prayer for the people as many will now die in these conflicts. I AM coming very soon, My children, so take heed of these words. All has been written will now come to pass, so study My Word and be approved, for many will not believe these conflicts will have any consequence and not pay attention. But those who pay attention will be given greater understanding. I AM.

Repent And I Will Give You New Wine

Hello My son, this is Jehovah Elohim speaking with you this day. My children listen closely, for the enemy has become furious as his time is short. If you are not paying attention to the words and warnings that I Am giving My prophets, watchmen and scribes then you will suffer greatly in the coming days. The US president will soon go into hiding as he no longer wields any power, for it has been taken from him. I have told many of My prophets and scribes of a “fiery kickoff event” that will happen in New York City, and this is true. There will be a new weapon – the likes the world has never seen – that will be ignited over Trump Tower in an effort to remove the president from power permanently, but he will not be there, though it will be reported that he was. The deception will become deeper and more overt now, so much that you will hear is suspect to error. Seek Me for clarification and I will illumine your heart to the truth. Once this happens, the chaos that follows will be a multitude greater than the attack on 9/11/01 and the people will cry out for a former leader who will burst onto the scene. He will speak great things and many will follow after him. He will then assume control of the nation and people will rejoice, but this is all from the evil one who seeks to destroy this once great land. And I allow it, for now is the time that I judge this nation for its gross sin that has become a stench in my nostrils. No longer will America be great again, but her fall will be great. This will send shockwaves all over the earth and every nation will feel its effects. The chaos that follows will be unimaginable, and if you are not in Me then you will be gripped with great fear. My children, I tell you these things so that you come to trust that I AM in sovereign control of all things, and that in Me you will have peace. I cry out to each of you now to turn from your sin and repent, and I will heal you and cleanse you. I will give you new wine and a new garment that shines as the sun. Come to Me now, My children, for the time of the end has come. I AM.

2 Corinthians 13:1
This will be my third visit to you.“Every matter must be established by the testimony of two or three witnesses.”

This vision from the Lord was posted here one year earlier on August 2, 2019.
(https://444prophecynews.com/the-power-of-fire-and-water-tsunami-mckana/). I saw today the prophetic word from 3M PROPHESIES which similar to what I saw. Seeing the closeness of the time and realizing the involvement of the life of many millions, I though it will be good to post it again to make sure the warning is out for all and clear our doubts about few of the questions raised when the vision was posted. New we have more than three witnesses. New York city in flames from Nuclear attack!

Last night I didn’t sleep since 3:00AM. I had a rough morning, sick until I hate everything (sorry for the word). I sat, saw the news and closed my eyes. The condition and my situation doesn’t permit me to think about anything but to have a small rest. I was swiftly drifting, gone for few minutes. I didn’t ask for it nor thought about it. What I saw shook me to the bones.

I saw New York city in flames, burning from nuclear attack. It is destroyed . When I see that, I said to myself, all what they are talking about came to be true. It was so real, in my face, as if I was there close to the action, I was shocked. It was an instant but very, very real. At the very moment, I saw Trump in a flash flew on the air right by the flaming city. I saw him speed passed behind the flame to the right, on the air. I don’t know what it means but that is what I saw. I saw what many have seen, The timing is what matters. This thing looks so close, God knows the time.

“And the Bomb is in the air-conditioning in the Trump Tower.”

I asked the LORD, “Will he (Trump) be killed when they say that he is?”

The LORD said, “He will be in Israel alive. Thus says the LORD thy God, He who has ears, let him hear.”

Prepare your houses for civil war.

An act in of violence will occur that sets off a chain reaction across America.

How do we prepare our houses, Lord?

Prepare against thieves who break in and steal, for many will become desperate in this time.  Most of all, prepare your faith, knowing I  am with you in all that happens.

Violence will be widespread as men give way to their baser instincts and as many give up hope and give way to their flesh. Pray without ceasing that you will be protected in this time, and for your loved ones protection also.

This war will be followed closely by another larger war as enemies invade and overcome America, for the time of her judgment is now.

Prepare your hearts for you will lose many loved ones in this time as the end of all things approaches.

(The Lord has shown  a countless number of people through dreams, visions, and prophecies in recent years, that Obama is the Antichrist and also that he will return to power in the USA)